Narges presented a very complicated patient, who presents with 2 days of abdominal pain and melena. He had a PCI 4 days prior with a drug-eluting stent deployed at the LAD, and he was discharged on aspirin and ticagrelor (PLATO trial, superior to clopidogrel). On presentation he was in hemorrhagic shock, with notable hematochezia on exam, encephalopathy, and a 4/6 systolic murmur with carotid radiation which turned out to be an undiagnosed severe aortic stenosis.

Question is, what to do if you see a patient like this? Let’s break it down.

In a nut shell:

For PCI in setting of ACS, however, the guideline is different:

Anti-platelet duration in setting of ACS

In patients with high bleeding risk or personal history of bleeding and/or long term NSAID use, preemptive prophylaxis with a PPI can be considered. If bleeding risk is significant, you can potentially decrease DAPT duration to at least 6 months, on a case-to-case basis.

The patient underwent EGD and a duodenal ulcer that was actively bleeding was found. There are certain features of an ulcer that we can use to risk stratify and determine how likely intervention will be successful, and how likely the ulcer will rebleed. This is the Forrest Classification, first published in the Lancet in 1974. Our patient in this case is class 1B, and he ended by rebleeding twice requiring additional endoscopic intervention. 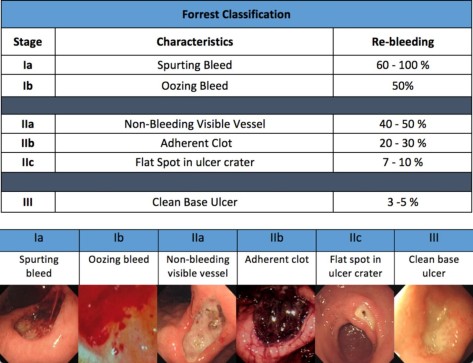 The key question here is, when to resume DAPT? The decision will have to be individualized and most would recommend restarting ASAP as soon as patient is clinically stable… At the same time, pt has one other newly diagnosed problem that makes his management tricky…

Referral to Cardiology because it is actually more complicated than this, there is also pseudo severe where AVR is not recommended, Low flow AS, low gradient AS, or both LF LG AS.

In setting of hypotension